Will every little thing be alright? Shane VictoriNOPE 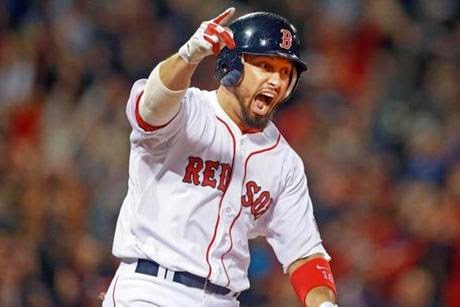 It seems the Flyin’ Hawaiian has met another obstacle on his long and seemingly endless road to recovery this season. If you were expecting every little thing to be alright before the All-Star break, then you are in for some disappointment. Shane Victorino’s rehab assignment has now been pushed back….again.

In case you have been living under a rock or just forgot Victorino was a Sox-man, Vic hasn’t played in a Red Sox uniform since May 23, when he went down with hamstring trouble, which caused him to miss the first 22 games of the season. He was then sent to Triple-A Pawtucket for a rehab stint, but ended up slipping a disk in his lower back in a game on June 24.

Manager John Farrell stated that Victorino had “increased symptoms in his lower back, but responded well to treatment.” Farrell added, “there was a tentative plan in place that had him up five consecutive days of games played, and that was going to include a progression through the typical 2-3 at- bats, all the way through a full nine innings. So we’re following that guide. We don’t anticipate him back until after the All-Star break.”

Needless to say, with the Red Sox current woes, this entire season has been a far cry from last year’s World Series Champion team. Victorino’s bat and glove have been missed. Farrell summed it up best, “His vacancy has left a hole in our lineup. That’s not to single out anyone else that’s played in our outfield. That’s to say Shane Victorino was a heck of a player for us last year. We miss that player.”