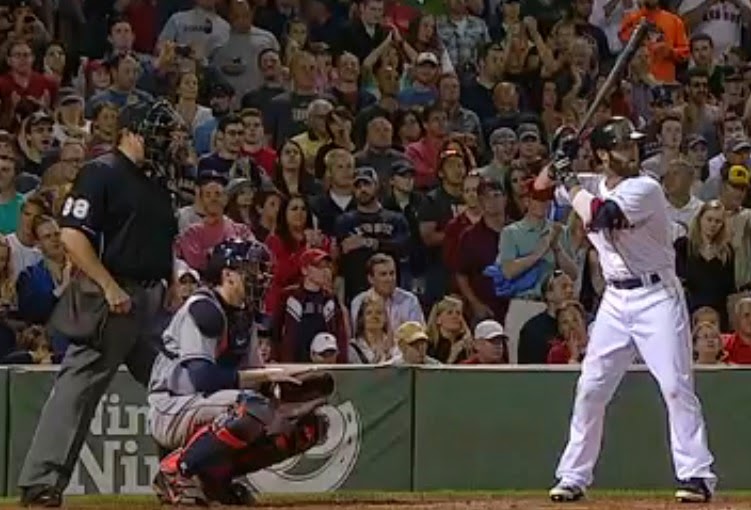 The Red Sox scored seven runs in the bottom of the sixth inning en route to an 9-4 win over the Houston Astros at Fenway Park. It was Boston's largest single-inning output of the 2014 season and increased the winning streak to four straight games.

Houston had an early 4-0 lead thanks to single runs in the second and third innings and another pair in the top of the fourth, all off Red Sox starting pitcher Allen Webster who went six innings to earn his third win of the season. He allowed four runs (three earned) on five hits and three walks while striking out a pair.

The Red Sox scored their first run in the bottom of the fourth when Dustin Pedroia (pictured) came in on a ground ball double play by Yoenis Cespedes.

Trailing 4-1 in the bottom of the sixth, Brock Holt led off with a double and was moved to third on a single by Pedroia. David Ortiz's RBI single plated Holt. Mike Napoli and Will Middlebrooks drilled RBI singles, Jackie Bradley Jr. drew a bases-loaded walk to drive in another and Christian Vazquez drove in another with a sacrifice fly. Pedroia capped off the scoring with a two-RBI double.

Holt made it 9-4 with an RBI single in the eighth.

Pedroia's three hits moved his average up to .285; Ortiz and Daniel Nava each had two hits for the Sox.

Prior to the game, Pedro Martinez, Nomar Garciaparra, Roger Clemens and radio broadcaster Joe Castiglione were inducted into the Red Sox Hall of Fame.