The Seattle Mariners rallied from a 5-3 deficit to defeat the Red Sox 8-6 at Fenway Park on Sunday afternoon. It was the eighth straight loss for Boston who have now been swept in two consecutive series.

The Mariners jumped out to a 3-0 lead in the top of the first inning off Boston starting pitcher Allen Webster who only lasted 4.1 innings and took the loss. 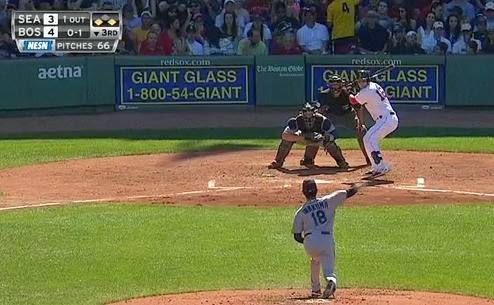 The Red Sox tied the game in the bottom of the first on an RBI single by Yoenis Cespedes and a two-RBI single by Will Middlebrooks (pictured).

Boston took a 5-3 lead in the third. Mike Napoli plated one with a ground out and Middlebrooks doubled home another run for his third RBI of the game.

Seattle scored one in the fourth, two in the fifth and insurance runs in the eighth and ninth to put the game away.

Kelly Johnson doubled home the final Boston run with an eighth-inning double. Cespedes led the Sox with three hits. David Ortiz left in the sixth after fouling a ball off his right foot.

Brock Holt, Mookie Betts and Allen Craig each had two hits for the Sox.