Allen Webster finishes strong; does he have a place in the rotation? 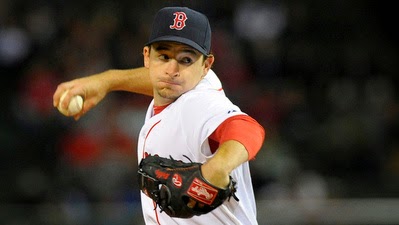 The Red Sox season may have been frustrating, to say the least, but there is plenty of cause for optimism going into the off-season. A lot of the young Sox prospects came up and performed well in the last month or so of the season, including Allen Webster. He was called up in July, and has had some up and down results, posting a 5-3 record and a 5.03 ERA in 11 starts with Boston, but he's been getting better in his last few starts, culminating in a 1-run, 7-hit performance in an 11-1 rout of Tampa on Thursday. He struck out 5 to only 1 walk on 99 pitches in 7 innings, a career high. In his last 3 starts of the year, he posted a 2-0 record and a 1.93 ERA (4 earned runs). He's also allowed exactly one walk and less than 2 runs in each of his starts, in which he's pitched 18.2 innings.

John Farrell had nothing but good things to say about Webster after his last start of the season, according to NESN:

“Much like we talked about with (Anthony) Ranaudo (Wednesday night), the final start of the year with some increased confidence going into the offseason,” Red Sox manager John Farrell said after Boston’s 11-1 win over Tampa Bay. “And even furthermore with (Webster), just some momentum as he finishes things out this year.”

“He’s starting to use his four-seamer a little bit more, which he’s able to keep on the plate and go to an area in the strike zone to get a strike when needed,” Farrell said. “That enables him to use his two-seamer with some added action rather than trying to fight back into the count all the time.”


Does Webster have a future? It depends on happens in the off-season - the Sox could add some pitching, but Webster should be at the forefront of John Farrell's mind during the off-season, given his performances in the past few weeks. I could see him being a back-of-the-rotation pitcher if he can continue working hard in the off-season and Spring Training (which can't come soon enough in my mind).

Stats and picture from NESN.com.