David Ortiz has some memorable moments against the O's, such as a brawl vs Baltimore ex-pitcher Kevin Gregg, smashing the dugout phone and several long shots to right field. During last weekend series against the O's, Ortiz homered twice on the first game, including a two-run shot in the 10th inning that eventually gave the Red Sox the victory. With those 2 homeruns, Ortiz broke Ted Williams' Red Sox record of at least 7 seasons with 30 homeruns and 100 RBI. Ortiz now is the franchise leader with 8 seasons of at least 30 homeruns and 100 RBI. On the second game, Ortiz demonstrated why he is the best DH of all time and smashed a two-run homerun in the first inning.


Few minutes later after Big Papi's shot, a Red Sox fan went to Wikipedia and wrote down that David Ortiz is the new owner of the Orioles. 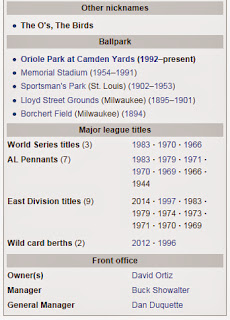 This may not be one of Big Papi's best seasons, but at the age of 38 he shows why he is a Red Sox legend. He even owned the Baltimore Orioles.