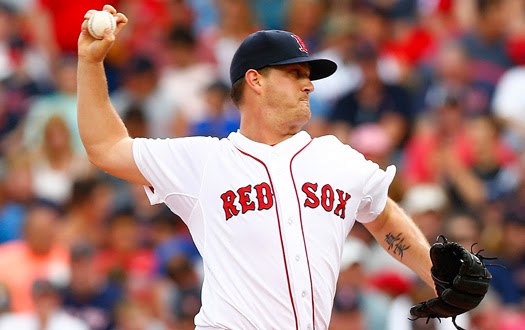 The Red Sox open up their last series of the season against their rivals, the New York Yankees. Most of the media focus will be on Derek Jeter, but the Sox will be looking to play spoiler and finish out the season on a high note. For the Red Sox, Steven Wright (0-0, 3.38 ERA) will take the ball in his first major league start this season with the Sox. He's made 5 appearances out of the pen in 2014 for the Sox with a 3.38 ERA and 18 strikeouts in 16 innings of work.

He'll be opposed by Chris Capuano (1-3, 4.73 ERA), who's had his struggles against Boston. He's 0-2 with a 5.74 ERA and 10 K's in 15.2 innings pitched, and that includes a start at the beginning of September in which the Sox tagged him for 4 runs and marked the beginning of his September struggles. The Red Sox offense, which has been explosive in the last 2 games, will be looking to add to that tonight and continue to head in the right direction going into 2015.

Stats and picture from MLB.com