The Red Sox outfield did not come close to meeting expectations this season. The Sox ranked 11th out of 15 AL teams in runs scored. The poor outfield production was a big reason why. As a group, their production was historically low. The poor grades will all reflect this. 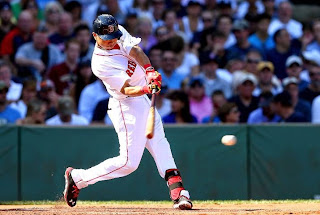 Before I get into individual grades, let's take a look at the outfield collectively as a unit. The Red Sox outfielders hit .249 with an OBP of .313. They drove in 178 runs and hit 26 homers. That roughly averages out to 9 homers and 60 RBIs for each spot. Correct me if I am wrong but isn't an outfield supposed to have power hitters. Only 9 homers per spot??? That's far from it. As Peter Abraham notes below, 5 outfielders hit more homers than the WHOLE Sox outfield did all year. Do you know who led the outfield in homers? Jonny Gomes led with 6 and he didn't even play for the Boston Red Sox for the last two months.

Now for the individual grades:

Jackie Bradley Jr.- If we were grading just his defense, he would get an A+. The jumps Bradley gets on fly balls are second to none. His arm was phenomenal and was better than advertised. He made numerous catches/throws where you said, "How in the world did he do that?" Nonetheless, Bradley's inability to hit cannot be overlooked. Had Bradley even hit .240, he would still be the center fielder for the Sox. Bradley failed to make adjustments all season long at the plate. He did not even stay above the above the Mendoza Line as he hit .198 this year. This simply does not get it done for an everyday center fielder.
Grade: D

Mookie Betts- Betts far and away exceeded everyone's expectations this year. Very few people even knew about Betts coming into the year. As an outfielder, Betts hit .291 and had 12 extra base hits. Although he is small, Betts showed that there is some pop in his bat. He filled in admirably as the lead off hitter down the stretch as well. Defensively, Betts looked like an adequate major league center fielder. His defense improved throughout the year the more reps he had. Not bad for someone who had never played the outfield before this year.
Grade: A

Rusney Castillo- Sure Castillo only played in 10 games for Boston this year, but he deserves a grade too. After all, he hit an astounding .333 with 2 homers, 6 RBIs, and 3 steals. After over a year off, Castillo was everything Sox fans could have hoped for. He showed off his "wow factor" with a couple of long homers and steals. Defensively, Castillo may not have an arm like Bradley Jr. or Cespedes but his arm is average and even after a year off, he still took good routes to the ball and used his speed to help him get there.
Grade: A

Yoenis Cespedes- A deadline day deal brought Cespedes to Boston giving the Sox some much needed outfield production. He hit 5 homers, 33 RBIs, and had an average of .269 for the Red Sox. Even though his raw numbers do not look like he had a huge impact, he still did. Cespedes gave the Sox another "presence" in the lineup which they were lacking all year. On the downside, Cespedes struck out over 40 more times than he walked in Boston. On the defensive end, Cespedes was not good for the Sox. He did not look comfortable playing the monster and often misplayed the ball off of the wall. On the other hand, his arm is fantastic. In just 43 games in left, Cespedes had 4 assists. The fear of running on Cespedes is also there as well, which prevented more runs.
Grade: B-

Allen Craig- Last year in the World Series while playing hurt, Craig hit .375 and was one of the main cogs in the Cardinals' lineup. The Red Sox got a player who did not even look like a shell of himself. He was flat out terrible. Granted it was a small sample size, but he still only hit .128 in 98 at bats. He looked lost at the dish. Defensively, Craig was average in the outfield. In a bigger right field, he certainly did not get to some balls that a faster player would have gotten to. Overall, Craig was good enough on the defensive end but his lackluster offensive performance cannot be overlooked, even in this small sample.
Grade: F

Daniel Nava- Nava was due for some regression this year after having an amazing 2013 where he had the 10th best average in the AL at .303. However, no one could have known how far down he would fall this year. Nava was so bad early on that he went to Triple A. To his credit, he hit .298 post all-star break after hitting an abysmal .238 pre all-star break. Nava also did not have the same pop he had last year. His homer total dipped from 12 to 5. Defensively, Nava looked average at best. He was overexposed as he had to play more right field than he should have, especially in Fenway Park.
Grade: C+

Shane Victorino- Victorino's 2014 season never got off on the right foot. He was banged up early in Spring Training and never got going. His injuries limited his time to just 30 games this year. When he did play, he reminded Sox fans that he is an electric ballplayer who can make things happen. While it is not a player's fault that he gets hurt, the fact of the matter is he did not stay on the field. Grading is based on on-field production and Victorino did not stay on the field.
Grade: D

Overall- The Red Sox outfield did not get it done this season. Plain and simple. The outfield production was atrocious. The players who did produce (Betts, Castillo, and Cespedes) were not on the team long enough to help the overall cause. The players who were with the team for the whole year were bad on both ends of the ball. It was truly a lost season for the Red Sox outfield.
Grade: D

Comment below or reach out to me on twitter @Ian_Vescera
Stats and photo from espn.com. Additional stats and info from baseballreference.com
Click here to read more posts by Ian Vescera.