The later we get into October, the closer we are to the start of baseball free agency. That can only mean good things for the Boston Red Sox and their fans. The Sox have to be busy this winter and there are many needs that they can address via free agency. Here are a few of those needs: 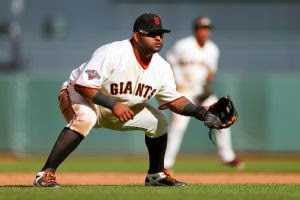 Third Base- Will Middlebrooks did not have a good season by any means. Middlebrooks looked lost at the plate all year long. He also missed time as he was injured yet again this season. Boston has given him plenty of chances to proves himself. They can't keep having seasons with poor third base production. On the other hand, Brock Holt had a really good year. Yet, he is much more valuable as a utility player than as a starter. Holt's positional versatility should be utilized off the bench. If they look internally past Holt, they do have Garin Cecchini. Cecchini was solid in September but I do not think that the Red Sox would want to go from one young third baseman to another. They need someone with more experience. Enter Pablo Sandoval. Sandoval will be a free agent at the end of the season and he is a big bat that the Red Sox offense could definitely use. Sandoval would cost the Red Sox a lot less than the premier free agent 3rd baseman, Hanley Ramirez. Sandoval will probably end up singing a shorter deal as well. Ramirez is the big name, but from a baseball perspective, Sandoval makes for sense for Boston. Sandoval is a switch hitter, although he is far better from the left side. He hit .317 from the left side while only hitting .199 from the right. Nevertheless, his left handed bat would be extremely valuable to this right handed heavy lineup. While he is not an great third baseman, Sandoval does an adequate job for someone of his size. He would fit in the middle of the order nicely and should be someone the Red Sox seriously consider.

Starting Pitchers- The biggest need for the Sox this winter. Jon Lester, James Shields, and Max Scherzer are the big names on the list. Quite frankly, I find it hard to believe that Boston will go out and sign Lester or Scherzer. They do not seem inclined, whether it is right or wrong, to sign a pitcher to a large contract north of 30 years old. However, Shields maybe a legitimate option. Shields is coming off a good year in Kansas City and would take less years and money than the other two aforementioned pitchers. He will still command a large contract but the Sox are financially flexible heading into next season. They can afford Shields and need 'Big Game James' to anchor the staff. After these top 3, there is a big drop off. Ervin Santana, Justin Masterson, and Francisco Liriano represent the next tier. None of these options interest me. All three have been dominant at times but their inconsistency is what has them in this tier. Taking a gamble on performance and paying a sizable deal to any of these pitchers is just not worth it. I would rather see the young pitchers out there and save payroll for bullpen or another position. Trading for Chris Sale, Johnny Cueto, Cole Hamels, or another big time starter makes more sense than handing out a deal to a pitcher in tier 2 just for the sake of it. The wild card in play here is Kenta Maeda. Reports say that Maeda is interested in pitching for the Red Sox or the Yankees if he comes over. Maeda is not projected to be as good as Yu Darvish or Masahiro Tanaka, but he is projected to be a solid big league starter. I would like to see the Sox take a chance on Maeda. He is only 26 and he is much younger than the starters on the market. Again, the Sox have the financial flexibility to do so if they want.

Backup Catcher- The Red Sox know that Christian Vazquez will be the opening day catcher next year. His backup? That is a different story. David Ross is 38 and is a free agent. Ross certainly did not have the year he would have liked. His bat looked slow and his offensive output simply was not there. There is also the possibility that Ross retires and the Sox will need a new backup anyways. Since Vazquez is a defensive minded catcher, the Sox may be better suited to sign an offensive minded backup. The problem is,the pickings are really slim. Wil Nieves might be the best option out there. Nieves is one of the better offensive catchers in this market. This really speaks to the lack of quality free agent catchers. However, Nieves has a career average of .243 and hit .254 last year. He could be a veteran that is brought in for one year to play sparingly. John Buck, another option, has decent pop for a catcher as well. In 8 of 11 seasons, Buck has double digit homers, which is nothing to scoff at for a catcher. Yet, he has not hit above .222 since 2010. While the options are not great here, Ben Cherington may end up resigning Ross or go out and trade for another backstop.

Any other free agents that the Sox could go after?
Comment below or reach out to me on twitter @Ian_Vescera
Stats and photo from espn.com
Click here to read more posts by Ian Vescera.