Who stays and who goes in the Red Sox outfield?

Now that the outfield grades are in, it's time to project the Red Sox outfield going forward for the 2015 season. Even though the outfield struggled throughout this season, the Sox still have very capable outfielders on their roster. In fact, they have too many outfielders. The reality is not all of them will be on the 2015 version of the Boston Red Sox. 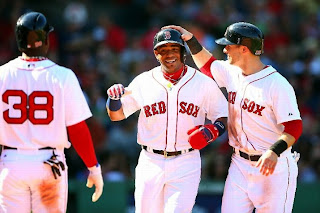 Jackie Bradley Jr.- The 2014 season was not kind to Jackie Bradley. His bat was never right as he hit below .200 and lost his starting job. Going forward, Bradley simply can't be relied upon to be an everyday outfielder. Until his bat gets going, there is no way he will be a starter on this team, especially with the logjam of other outfielders. That being said, Bradley's value has plummeted tremendously since last year. Trading him now would be selling extremely low on this still very talented prospect.
Verdict: Sent down. Jackie Bradley Jr. will not be a part of the Red Sox outfield plans next year. He will spend the 2015 season working on his offense at the Triple A level.

Mookie Betts- Betts performed admirably in what could have been considered a "tryout" for next season. Betts proved that he is capable of being a good offensive player, a steady lead off hitter, and a quality defensive outfielder. The Sox would love to find a spot for this dynamic young player to play. Unfortunately, there might not be a spot for him. His "tryout" may have been for another team's outfield as Betts could be a major trade chip in a deal to bring the Sox back an ace.
Verdict: Traded. Betts will be the centerpiece of a deal that nets the Sox an ace that they have desperately been missing since the Jon Lester trade.

Rusney Castillo- Although he only played in Boston for a short time, Castillo showed why the Sox committed 72.5 million dollars to him. He has a great power and speed combo that could make him an outstanding player. Even after a year off, Castillo showed that he can produce at the major league level. Although it was a small sample, it was very encouraging to see.
Verdict: Starter. The Red Sox just made a huge financial commitment to Castillo. It is highly unlikely that they would have done this just to trade him. Castillo is a part of the outfield plans for next year and for years to come.

Yoenis Cespedes- Cespedes was Boston's big mid season splash and he did not disappoint. Cespedes had 100 RBIs for Oakland and Boston this past season. The Sox simply do not have another big bat like his in the outfield. A full year in Fenway would greatly help Cespedes to improve his suspect defense to go along with his monstrous arm. Although he will be a free agent after this season, and is not sure if he will return, the Red Sox need to see this big time talent for a full year in Fenway.
Verdict: Starter. Cespedes' impending free agency should not affect his spot on the Boston roster next year. The Red Sox need to see what a full year of Cespedes can do in Fenway. A big time talent, Cespedes should have a great year next season.

Allen Craig- Craig followed up a stellar 2013 season with an abysmal 2014 season. Like Nava, the lack of consistency is the issue with Craig. There is no doubt that the talent is there, but can he produce for a full season (and stay healthy)?
Verdict: Platoon/bench player. Craig will most likely be in a lefty-righty platoon with Nava. Craig has the talent to have a fantastic season next year if he stays healthy. Handing him a starting spot would be foolish coming off of his injury plagued, bad season.

Daniel Nava- The Red Sox need to figure out what Nava can be going forward. Is he the .300 hitter he was in 2013 or is he the player we saw in the first half of this season who got sent down? The answer lies somewhere in the middle. Nava is probably closer to the .297 hitter we saw in the second half but the lack of consistency hurts Nava's value.
Verdict: Platoon/bench player. The reality is the Sox can't rely on Nava again heading into next year to be a full time starter. A starting role proved to be a little too much for Nava to handle this past season. He still hits right handers well so a platoon role with Craig is a serious possibility.

Shane Victorino- Victorino is easily the biggest wild card the Sox have. When healthy, he is an all star type player, a gold glove defender, and an electric all around ballplayer. The key word is health. If the Sox can't count on Craig or Nava as a starter heading into this season, they most certainly can't count on Victorino to be a starter. While the talent remains, the health cannot be overlooked.
Verdict: Bench. As the injuries continue to hamper Victorino's career, he will not be trusted to be an everyday player going forward. What he can be is a very valuable defensive replacement, pinch runner, and fourth outfielder. He will not be in the Mike Carp role of playing once or twice every two weeks but rather a starter 3 or 4 times a week. This will allow the Sox to keep Victorino fresh and get the best out of him.

Now this projection could very easily be changed if a certain Marlins' outfielder becomes available. If Stanton is on the block, I fully expect the Sox to make a big push for him. With that being said, this is only if he becomes available and that is a big if since he is coming off a major injury. The outfield is could also change during the season as an outfielder may be dealt to help upgrade at another position.

When the dust settles, here is how I project the Red Sox 2015 outfield:

Heading into next season, playing Nava and Craig in left field makes more sense than Cespedes. Right field will allow the Sox to take advantage of Cespedes' arm. He also did not look comfortable in left field so right might suit him better. Offensively, Cespedes having a full year in a hitter's park like Fenway should only help his overall numbers. The left field platoon will be similar to the Gomes/Nava platoon the Sox had during the 2013 season. Nava has shown that he excels in this role and this will allow Craig to get some at bats while he tries to recover after a lost year. Castillo will be starting in center as the Sox believe in him as evident by his hefty contract.

On the bench, the Sox will have Victorino and Craig/Nava (depending on the match up), and Brock Holt. Victorino should excel in this role as playing less will allow him to remain healthy. If Holt does not start at 3rd, you can figure that Holt will get time to play and the outfield may be a spot for him to fill in on occasion. The Sox will also have Bradley Jr. and Brentz in the minors as depth options. Bradley will be up at some point before September if his offense improves and if not, he certainly will be in September regardless. Brentz showed in limited time this year that he could be capable of filling in if an injury arises.

The Red Sox will certainly have their hands full trying to deal with the crowded outfield this off-season.