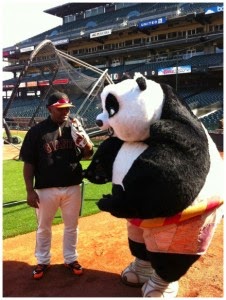 Yesterday there was a sighting of Pablo Sandoval on a flight to Boston.

It was up in the air after the signing of Hanley Ramirez for 5 years at $90 million dollars if the Red Sox would make another splash at third base so soon.

That puts the Red Sox staring lineup for 2015 right now at something like:
All that is now left is to pull in the pitching with Jon Lester and Andrew Miller, right?