Breaking: Andrew Miller to the Yankees 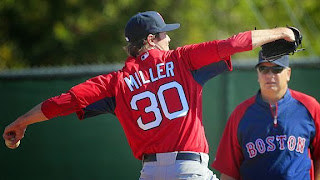 Scratch one name off of the Red Sox wish list this off-season. Former Red Sox reliever, Andrew Miller, signed a 4 year $36 million deal with the New York Yankees today.The club announced the move earlier today. Miller is coming off of a career year. In 73 games, Miller pitched 62.1 innings, had an astonishing 2.02 ERA, and had 103 strikeouts to only 17 walks. The Houston Astros were also in on Miller. Their offer to Miller was 4 years for $40 million. Miller left the extra $4 million on the table for a chance to win in New York.

The signing by the Yankees may very well mean the end of David Robertson in New York. Although the Yankees could find the money to pay Robertson, odds are they will not pay both relievers. Andrew Miller, in all likelihood, will set up Dellin Betances. Betances emerged onto the scene last year in his first full season in the bigs. A combo of Betances and Miller will easily be one of the top duos in the game.

From the Red Sox point of view, the price tag was clearly too high. If the team has any hopes of acquiring an ace (Jon Lester anyone?), then they simply could not resign Miller as well. However, the Sox will still need to acquire a lefty reliever. As of now, Tommy Layne is the only lefty in the bullpen. Drake Britton and Edwin Escobar could be in house candidates to take the job. Other former lefty Red Sox relievers could interest the team as well. Rich Hill or Chris Capuano could find his way back Boston on a one year, incentive based deal. Phil Coke, Neal Cotts, and Scott Downs are also still available and would be cheaper than Miller. The option of acquiring someone via a trade is always still a possibility.

Thoughts on Miller signing with the Yankees or what the Red Sox will do now?
Comment below or reach out to me on twitter @Ian_Vescera
Click here to read more posts by Ian Vescera.
Stats and photo from espn.com