3 hitters who have impressed this spring 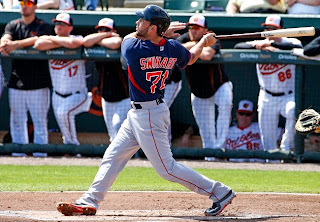 While spring training stats are not a good indicator of regular season success (see Jackie Bradly Jr in 2013), it is often interesting to see who is off to a good start. Even though the games are meaningless, it is still nice to see players perform well as it gives them confidence heading into the regular season. Here are three positional players who have wowed me so far:

1. Mookie Betts- Is there any way Mookie Betts does not lead off this list? (easy pun, had to take it) Betts is hitting a scorching .435 with 5 extra base hits and has an other worldly OPS of 1.174 so far. Even had Castillo been healthy, it would have been tough for him to take away the center field job from Betts. Mookie is picking up where he left off last year and that is great news for Sox fans.

His outfield play is greatly improved from last season. Betts is showing once again that he is the catalyst the Red Sox need atop the lineup. He has also caught the baseball world by storm this spring and is gaining a lot of recognition nationally. Jon Morosi of Fox Sports and of MLB Network is clearly one of Betts' biggest believers as noted in the tweet below.


Red Sox fans: Get out your Opening Day lineup card and write in Mookie Betts as the center fielder . . . Using an ink pen.

2. Blake Swihart- Although Blake Swihart will probably begin the 2015 season in Triple A, he has been nothing short of spectacular in his 7 spring training games. Swihart is hitting an absurd .538 with a homer and 4 RBIs. He is a special switch hitting bat and does it from the catcher position. If he keeps swinging the bat the way he is, Swihart won't be in the minors for too long. He is a great talent, one that should be untouchable from the Red Sox point of view. Look for Swihart to be up at some point this year.

3. Mike Napoli- With 2 homers the other day versus Pittsburgh, Mike Napoli appears to be swinging the bat like his old self again. Napoli is hitting .412 with 2 homers and 3 RBIs this spring. He is in need of a good spring after a down year last season. His average dropped 11 points from 2013 to 2014 and he had 37 less RBIs as well.

Napoli admits to feeling much better after having sleep apnea surgery this offseason. “When I wake up now, it’s like, ‘Man, I was in a deep sleep.’ I can tell. Just being motivated and wanting to do stuff," said Napoli. He is a big key to the Red Sox lineup. Napoli can really give the lineup some thump and depth if he can produce like he did in 2013. So far, the surgery seems to be paying dividends.

Thoughts on other hitters who have stood out so far?
Comment below or reach out to me on twitter @Ian_Vescera
Click here to read more posts by Ian Vescera.
Photo from boston.com
Stats and info from mlb.com