Christian Vazquez to have second opinion after MRI finds "something" 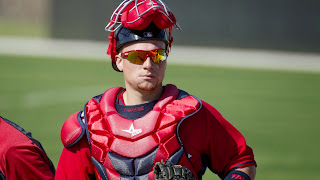 Christian Vazquez, the 24 year old starting catcher, may have a lost 2015 season. Vazquez had an MRI on his throwing elbow on Friday and is now set to have a second opinion after "something" was found.

Doctors have not made a firm diagnosis as of Saturday morning. John Farrell said the club would have a better idea by Sunday. Vazquez is now all but certain to be out for opening day.

Ryan Hanigan, Vazquez's projected backup, is expected to see an increased role due to the injury, according to Farrell. The journeyman catcher Humberto Quintero may stick around if Christian Vazquez's injury is just short term. Hanigan would see the majority of the time with Quintero serving as the backup.

If the injury is long term, Blake Swihart, the clubs other prized catching prospect, could be in the mix. "Anybody in our uniform is always under consideration,'' said Farrell when asked about Swihart. “We'll see how things play out in the next eight or nine days." Swihart was projected to start the year in Triple A and be the everyday catcher there.

This certainly does not look good for the Red Sox and Vazquez. It is hard to imagine a small injury would warrant a second opinion. This could be a huge loss if he is out for a significant amount of time.

Update: Vazquez will meet with Dr. James Andrews on Wednesday for a second opinion.

Thoughts on this potentially big injury?
Comment below or reach out to me on twitter @Ian_Vescera
Click here to read more posts by Ian Vescera.
Photo and info from espn.com