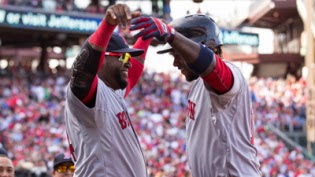 Opening Day was all smiles for the Red Sox in Philadelphia. Case in point, David Ortiz and Hanley Ramirez danced to "That's Amore" in the dugout as Boston was on its way to an 8-0 victory.

We all know Ortiz and Ramirez will be a lethal combo, but I don't think Red Sox fans had this in mind. Dancing with the Stars should be calling them in no time. If they aren't calling them both as we speak, here are some reasons why they should be considered for the show:

1)-Their technique was solid. Ramirez's spin of Ortiz was right on the money. They didn't miss a beat.
2)-They can handle the pressure. David Ortiz would be at his best on the big stage, under the bright lights. It would be no different than the big stages of October baseball.
3)-These two are athletes. Sure they may not be the fleetest of foot on the diamond, but they certainly have enough to perform dance moves.
4)-They can do more with some space. I am sure Ramirez and Ortiz would have liked more room than a crowded dugout to perform their routine. It can be very tough to move around with all those people, bats, and balls in the way. Still, they didn't get anyone hurt or knock anything over. There is something to be said for that.
5)-They are creative individuals. They probably came up with this on the spot. Give these two some time to practice a routine and we have something special on our hands.

Kidding aside, team chemistry can be huge for a ballclub. It was evident that the "Band of Bearded Brothers" version of the Red Sox had that chemistry. This group appears to have it as well. Granted, liking the other 24 guys in the clubhouse means nothing if you are losing, but it is still great to see the bond Ortiz, Ramirez, and the whole team has with each other. The chemistry should only grow as the wins pile up.


Thoughts on the brotherly love?
Comment below or reach out to me on twitter @Ian_Vescera
Click here to read more posts by Ian Vescera.
Video clip courtesy of Pete Blackburn on Vine
Photo from nesn.com