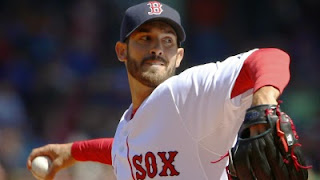 The Sox have lost 5 of 7 and after last night's debacle with Clay Buchholz on the mound, the team desperately needs Porcello to go deep into tonight's match-up. The starting rotation hasn't given any help to the already thin bullpen over the last few games and today a couple of moves have been made to help with that; Jackie Bradley Jr was optioned back down to Pawtucket and Anthony Varvaro was designated for assignment in order to make room for two relievers, Dalier Hinojosa and Tommy Layne.

The Jays lineup is without Jose Reyes after he was placed on the DL earlier this week but that didn't slow them down last night after they racked up 11 runs last night. Porcello has given up at least four runs in each of his last three starts so shutting down the Jays early would be one of the keys to taking the series win tonight.

The Sox lineup for tonight is:

- Sandoval is 7 for his last 9 with four extra-base hits and 7 RBIs
- Hanley Ramirez hit his 9th homer last night and his 200th of his career. In Red Sox history, only David Ortiz has hit more before May 1st (10 homers in 2006)
- R.A. Dickey went 4-0 with a 2.23 ERA in 5 starts against the Red Sox last season
- Anthony Varvaro, who was DFA'd earlier today, only pitched in 11 innings but gave up 14 hits and 6 walks with a 4.09 ERA
- Mike Napoli returns to the starting lineup after missing the previous two games in the series because of an illness