Any thoughts of a lingering hangover from the Sunday night beatdown at the hands of the Yankees were quickly dispelled as the Red Sox pounded out 13 hits in a 9-4 win over the Washington Nationals in Monday afternoon's home opener at Fenway Park. 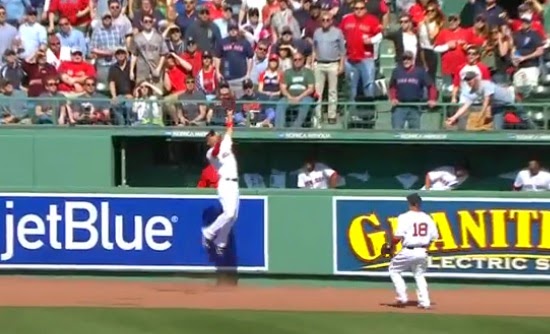 No one had a better time than Mookie Betts (pictured). He homered, stole two bases on the same play, and robbed Bryce Harper of a home run in the top of the 1st inning.

Remember the Betts for Cole Hamels talk a few weeks ago?

I didn't think so.

Rick Porcello was the beneficiary of the offensive support in earning his first win of the year. He went 8 innings, charged with 4 runs (3 earned) on 4 hits, 2 of them home runs. He walked 1 and struck out 6.

Junichi Tazawa closed out the 9th inning for the Red Sox striking out the side.

The Red Sox scored in each of the first three innings. A Wall Ball single by David Ortiz plated the first Boston run in the bottom of the 1st. Mookie Betts hammered a 3-run blast to left field in the 2nd, and Xander Bogaerts, Sandy Leon, Betts and Dustin Pedroia had RBI's in the 3rd.

The offense came up with 13 hits on the afternoon. Leon had 3 hits for Boston; Pablo Sandoval, Betts, Bogaerts and Ortiz each had two. Ortiz's 2nd hit was a towering home run to deep left center in the bottom of the 6th inning.