Watch all 5 homers from the Opening Day win (video) 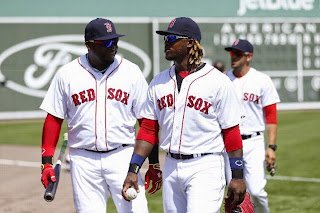 The Red Sox were scoring runs early and often in the Opening Day 8-0 rout of the Phillies. The first of 5 homer runs came from Dustin Pedroia with 1 out and no one on in the first. This gave Boston a 1-0 and the club never looked back.

Mookie Betts hit the next one as he hit a solo blast to lead off the 3rd. This made it a 2-0 Sox lead.

Pedroia's second solo shot of the afternoon occurred with one out in the 5th as he drove the ball over the left field wall to give the Sox a 3-0 lead.

With 2 down in the 5th, Hanley Ramirez got his first hit in a Red Sox uniform. This solo home run put the Red Sox up 4-0.

To top it off, Hanley Ramirez hit a grand slam, his second homer of the day, to extend the lead to 8-0 with 1 out in the 9th. This knockout blow hit the foul pole and Ramirez even cracked his bat in the process.

Thoughts on the home run derby that happened in Philly?
Comment below or reach out to me on twitter @Ian_Vescera
Click here to read more posts by Ian Vescera.
Info and video courtesy of mlb.com