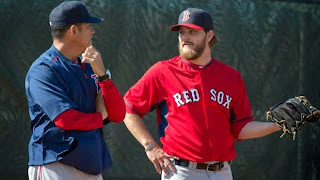 The potent lineup the Red Sox have will be extra thin tonight as they begin a three game series. David Ortiz lost his appeal for his one game suspension and will serve that tonight and a number of moves have been made since the final out of their home-stand concluded Wednesday night. With Hanley Ramierz injured, the Sox will need the first strong outing out of Miley tonight not only to help out the lineup but also give some much needed confidence to the pitchers.

Pitching Coach Juan Nieves was fired yesterday after a couple of seasons with the club and the team has yet to name his replacement. Also, reliever Edward Mujica was designated for assignment after a disappointing year plus with the Sox. Mujica was 3-5 with a 4.03 ERA in 75 appearances and it is believed that the team will try to find a team to trade him to over the next few days. The corresponding move for the team was recalling First Basemen Travis Shaw, who will be starting and batting 9th.

- The Red Sox potent lineup hasn't really lived up to the hype yet this season, through 28 games the team has a .239 batting average
- Jays Catcher Russell Martin has hit 4 homers in his last 5 games and now has 7 on the season
- Both teams starting rotations are some of the worst in the AL; the Red Sox are last with a 5.54 ERA and the Blue Jays are at 5.40 ERA
- Jays Starter Aaron Sanchez walked 6 batters in his last start, which is the 2nd time that's occurred in his last three starts