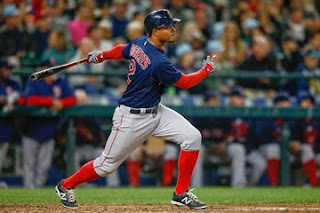 The Red Sox return home after a 10 game road trip and start a three game series against the Rangers tonight, first pitch is at 7:10 pm. Wade Miley (2-4 5.60) takes the hill for the Sox after they finished their longest road trip on the season so far by going 5-5. He will be going up against Rangers starter Yovani Gallardo (3-5 3.94) who is coming off his longest outing (7 innings and a win over the Royals last Wednesday) since being acquired by the Rangers this winter.

The Sox, who are only 7-9 at Fenway this season, are hoping that a little home cooking will help improve the lackluster offense. One player that has had a nice improvement over the last week was Xander Bogaerts, who's batting .316 in his last 6 games while recording his third triple of the season. He'll be batting 8th tonight for John Farrell's club.

Here is the rest of the lineup:

- Speaking of improving the lackluster offense, Mookie Betts must be pumped to return back to Fenway. He is 1-20 since May 12th, but in his last 9 home games, Betts is batting .324 to go along with 3 homers and 9 runs batted in.
- Shane Victorino, who is quietly getting back into the swing of things after landing on the disabled list, is not in the lineup tonight. He's currently on a 4 game hitting streak, batting .353 with a homer and a stolen base.
- Former Sox Third basemen and current Ranger Adrian Beltre recently hit his 400th homer, becoming the 52nd player to do so.
- Sox Reliever Matt Barnes has pitched well in a small sample size so far this season. He's only given up 1 earned run in 7.1 innings this season.