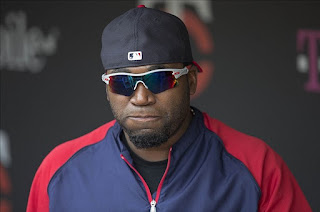 After being swept by the surprisingly hot Twins, many expected more changes to the Sox roster as they start a 4 game series against the Rangers. The front office and John Farrell agreed to shake things up even more today. Tonight's Sox starter will be Eduardo Rodriguez, who got the call-up from Pawtucket and will be making his first Major League start of his career. Many reports state that the team will send the young starter back down to AAA after the start but will leave the door open to keep him up in case of a solid performance. Two more call-ups were done this afternoon; Robbie Ross Jr gets called up once again to bolster the bullpen and recently acquired Outfielder Carlos Peguero will be joining the big league club. The corresponding moves are Heath Hembree and Jeff Bianchi will be sent back down to the minors and Daniel Nava was placed on the 15-day DL.

But that wasn't the biggest news of the day. John Farrell announced that David Ortiz will be sitting out the next few games to "work on his swing". The feared DH has been anything but that in the first two months of the season and a lot of chatter has begun to arise regarding whether he's finally started to begin his decline. In his place at the DH spot tonight will be Hanley Ramirez, who has 1 RBI this month and has also struggled to find his power that he had in the first month of the season. He will be going up against Nick Martinez, who will be getting his 10th start of the season. Martinez is 4-0 with a 1.96 ERA which is good for 3rd in the AL.

- Eduardo Rodriquez will look to be the first Sox starter to win his major league debut since 2007, Daisuke Matsuzaka
- Prince Fielder is leading the American League in batting average, he's currently at .368
- Nick Martinez has the 4th highest run support of any pitcher in baseball, averaging 8.18 runs per game
- Josh Hamilton will be playing in his first home game since rejoining the Rangers after being traded from the Angels