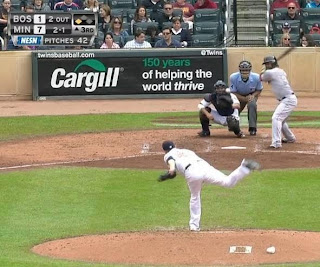 Red Sox starter Joe Kelly never saw the end of the second inning as the Twins scored six runs in the bottom of the second en route to a 7-2 win over Boston at Target Field in Minnesota.

Kelly lasted just 1.2 innings in losing his fourth game of the year against just one win. That second inning was just brutal - the Twins sent twelve batters to the plate and scored six runs on eight hits.

Boston scored twice in the top of the third inning on an RBI ground out by David Ortiz and an RBI single by Hanley Ramirez (pictured).

Mike Napoli, Dustin Pedroia and Mookie Betts each had two hits for the Sox. Xander Bogaerts had his seven-game hitting streak snapped.