Should Rusney Castillo get called up? 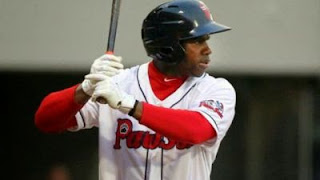 While the Boston Red Sox outfield continues to struggle at the plate, a certain 72.5 million dollar outfielder is hitting his stride for the Pawtucket Red Sox. Rusney Castillo is hitting .304 with 2 homers, 9 RBIs, and 6 steals in 17 games down in Triple A. He has overcome numerous injuries that plagued him early on and now is finally healthy.

Castillo had a nice three game stretch this past weekend versus the Columbus Clippers. He went 7-16 with 2 homers, 4 RBIs, and 2 steals. Personally, I saw Castillo play live on Sunday. He went 1-4 with 2 strikeouts, a single, and 2 stolen bases that afternoon. While it wasn't Castillo's best game, it was still a productive one.

Although numbers never lie, they can still be deceptive. A player can put up good numbers and still not be ready for the show. They are not deceptive in this case though. Castillo looks like a major leaguer right now. He passes the eye test. Castillo put up four good at bats, despite two of them resulting in strikeouts. He also picked his spots nicely when stealing. Lastly, he looked pretty crisp out in center field.

As currently constituted, the Red Sox outfield consists of Hanley Ramirez, Mookie Betts, Shane Victorino, Daniel Nava, Jackie Bradley Jr., and super utility man Brock Holt. It does not appear as though there is room for Rusney Castillo at the moment. However, if the outfield continues to struggle, Castillo will be called up sooner rather than later. There are numerous ways in which the Sox could find a roster spot for Castillo. Bradley could be sent down or Nava could be designated for assignment to make room for Castillo.

Personally, I think Rusney Castillo needs to be playing everyday for the Boston Red Sox, not the Pawtucket Red Sox. The Red Sox would not rushing along a young kid who is inexperienced. Castillo is 27 and has a lot more experience than most prospects do. The worst thing that could happen is he hits under .200 like the rest of the struggling right fielders. It's worth a shot now. He could be the spark the Sox need.

What say you Red Sox Nation? Should Castillo be called up to the bigs? Vote in the poll below.