Victorino to the DL - Bianchi called up 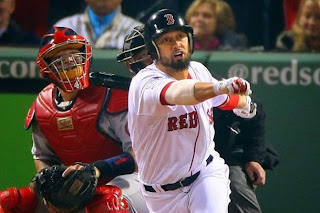 The Red Sox announced Sunday morning that outfielder Shane Victorino has been played on the disabled list with a calf injury and infielder Jeff Bianchi has been called up from AAA Pawtucket to replace him.

Victorino left Saturday night's game in the third inning after having some difficulty in the outfield in the top of the frame. He already missed two games last week with what was termed general soreness.

Bianchi joined the Red Sox on a minor league deal this past January after spending parts of the last three seasons with the Milwaukee Brewers. A utility player, he's played second, third, short and left in his major league career.