Do the Red Sox have the AL East right where they want them? 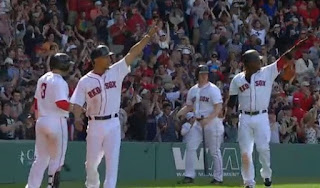 To say that the 2015 Red Sox season has been a major disappointment after fifty eight games would be a major understatement.

Pablo Sandoval appears to have lost the ability to make even the most routine of plays, Hanley Ramirez is struggling in the field, David Ortiz has had good spurts at the plate but he's having difficulty against lefties and recently found himself out of the lineup for a couple of days.

And as for the pitching? Remember the "I'm the ace" shirts? They haven't exactly been a hot item on Yawkey Way this spring.

The Red Sox head into a three-game road series with the Baltimore Orioles tomorrow night after completing a weekend sweep of the Oakland Athletics at Fenway Park Sunday thanks to a seven-run eighth inning, a comeback the likes of which we haven't seen since...well...certainly not this season. With a record of 27-31, they find themselves 5.5 games behind the first-place New York Yankees who have won six in a row and seven of their last ten games.

And they may have the AL East exactly where they want them.

Simply put - you may be what your record says you are, but the Red Sox simply aren't this bad. And given the mess of a division they're playing in, winning the AL East isn't even remotely out of the question.

You want reasons to be optimistic?

This is a young team, especially up the middle. A rookie catcher forced into being an everyday player because of injury, a 22-year old centerfielder who's really a second baseman, a shortstop who's also still only 22, a rightfielder who has just 85 major league at bats.

And as for some of the veterans? Ramirez looks lost in left field, but I'm inclined to give him at least some benefit of the doubt since not only has he been asked to switch from infield to outfield at age 32, but he's been put into arguably the toughest leftfield in baseball. He's spent his entire career on the dirt and is now trying to figure out a wall that has given far better defensive players fits. Let's not forget that Jim Rice and Carl Yastrzemski didn't learn that wall overnight. HanRam might not be in the team's long-range plans for left, but it's still too early to write him off out there.

Ortiz isn't done yet, no matter how bad he's appeared to be at times. And Sandoval simply isn't this bad on defense.

Dustin Pedroia has caught fire since being installed as the team's leadoff hitter, hitting nearly 500 for the month of June (no, I don't care that we're only about a week into the month). Xander Bogaerts is starting to show the poise we first saw in him back in 2013, and as noted above, he's still only 22 years old.

But it's the pitching that will define this season.

Eduardo Rodriguez has shown poise beyond his age, Yesterday's speed bump aside, Clay Buchholz had pitched into the eighth inning in each of his last four starts with a 1.47 ERA and a WHIP of 0.75, and Rick Porcello's track record would indicate that by season's end he will have double digits in wins as he's done his entire career to this point.

The bullpen is competent (ok, let's agree not to bring Craig Breslow in with runners on base).

And then there's the division. The Yankees are playing well at the moment but they're old, and old doesn't tend to play well when you get into the second half of the season. The Rays are playing over their heads, the Blue Jays are...well...the Blue Jays (meaning get back to me if they're still hanging around in September), and the Orioles are dealing with some of the same problems as the Red Sox without the benefit of a strong farm system to fill in gaps as needed.

The Red Sox are 5-2 in June. If they can run off a 7-3 or 8-2 stretch over the next two weeks, they could make things very interesting heading into next month's All-Star break.