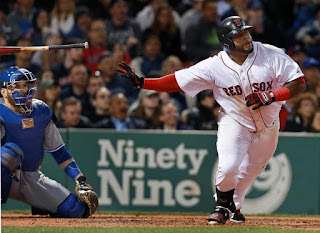 A series win against the Rays has the Sox still in the hunt in the AL East and now as they start a 4 game series north of the border, there is still hope that they can make a move on the 4 teams ahead of them. Currently, the Sox are 7 games behind the Jays for 4th place, but the O's, Rays, Yanks and Jays are all separated by a game of each other. Another series win as we head towards the half way point of the season might give the team the boost of momentum they've been dying to get all season long.

The Red Sox will have Clay Buchholz (5-6 3.68) going in the first game of the 4 game series against the highest scoring offense in the MLB. Buchholz is 2-1 with a 1.82 ERA in his last 5 road starts and has pitched about as well as he ever has over the past couple of months. The Jays will have R.A. Dickey (3-7 4.88) who is in search of just his 2nd win in his last 7 starts. He's had three starts against the Sox this season and hasn't pitched particularly well, going 0-2 with a 6.16 ERA and has to worry about Pablo Sandoval, who is 4/9 against his this season with a homer and two doubles.