Recap - another REALLY ugly loss for the Sox 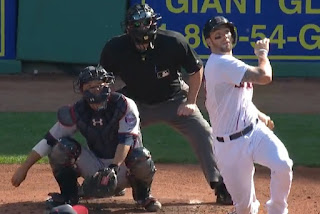 The Minnesota Twins scored four runs in the top of the ninth inning to beat the Red Sox 8-4 at Fenway Park Thursday afternoon in the finale of their four-game series.

Errors played a rather large factor in this game including the second of the game for Pablo Sandoval in the ninth inning that allowed the first Twins run to score in the inning.

Two Minnesota errors in the bottom of the second inning helped the Red Sox take a 2-0 lead. Later in the top of the sixth, after Boston had pulled out to a 4-0 lead, Sandoval's first error helped lead to a Twins run that tied the game at 4 apiece.

Blake Swihart (pictured) and Dustin Pedroia went deep for Boston. It was Swihart's career first and Pedey's eighth of the year.

Steven Wright went six innings charged with four runs (three earned) on six hits and no walks while striking out two. Three of those runs came on Torii Hunter's eighth long ball of the year in the top of the fifth, one of three hits for Hunter in the game.