Clay Buchholz gave the Red Sox seven outstanding innings and the offense pushed five runs across in the bottom of the sixth inning as Boston beat the Orioles 5-1 at Fenway Park on Wednesday night. 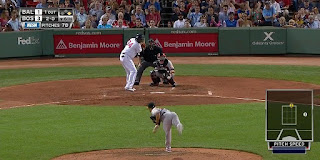 Buchholz improved his record to 5-6 and saw his ERA drop to 3.68. He gave up one run on eight hits and one walk while striking out seven.

The Orioles scored first on an RBI single by Chris Davis in the top of the sixth.

Boston roared back in the bottom of the frame with five runs on four hits and a pair of Baltimore errors. RBI singles by Mookie Betts and Dustin Pedroia pushed across two runs and David Ortiz (pictured) followed with his eleventh home run of the year, a two-run shot to center field that just cleared the wall.