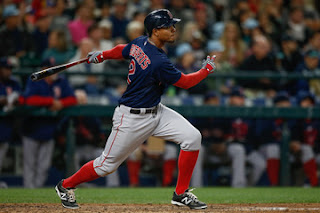 The Red Sox won their first series since before the All Star break over the weekend, but as the trade deadline approaches, the team still appears to be prepared to move towards the 2016 season. Mike Napoli has struggled mightily over the first half has shown a glimmer of hope at turning his season around and might gain some added value for a possible deal to a contender. Last night we saw the Sox full potential with a blow out win, combining the high powered offense with very good pitching.

The White Sox come into town tonight, another team that has not reached expectations. They will have John Danks (5-8 4.66) on the hill as they attempt to win their 5th game in a row. The Red Sox will be sending Joe Kelly (2-6 5.74) back on the mound as he looks to regain some of his success beyond a high 90's fastball. Both of these teams have some of the worst run differentials in the MLB and have had similar inconsistencies on offense all season, so it'll be interesting to see which version of each team shows up during this series.

- Brock Holt left last night's game because of left knee tightness, so Jemile Weeks gets the start at second tonight
- John Danks has a 2-5 record with a 5.68 ERA in his last 8 road starts
- Xander Bogaerts is hitting .413 in his last 19 games
- David Ortiz knocked in 7 runs last night, which is a career high