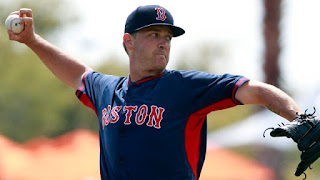 The White Sox will try to sweep the Red Sox tonight at Fenway, which if they are successful, will bring their winning streak to 8 games. This streak that the White Sox have been on has vaulted them back into contention for the Wild Card and will look to get back to .500 baseball. They are now looking to add pieces in the trade market, something that Red Sox fans would love to be watching for, but instead are stuck adding marginal players to their roster today. Daniel Nava was designated for assignment and Tommy Layne was optioned back to Pawtucket, while Jonathan Aro was recalled to fill the bullpen spot and Jeff Machi was added to the roster. Not what we all had hoped for this time of year.

Steven Wright (3-4 4.78) will give it another go around with his knuckle-ball on the mound tonight paired with Blake Swihart behind the plate. Wright hasn't had a ton of success since rejoining the rotation. He has two straight losses and an ERA of 7.71 in those two starts which fits right in with the rest of the rotation this series. He will face a White Sox lineup that has come alive during their winning streak and on the mound for them will be their ace Chris Sale (9-5 2.85)

- A win tonight for the White Sox will give the team their first 4 game sweep at Fenway in 88 years
- Melky Cabrera has been quite the catalyst for the White Sox during their 7 game win streak, he has multi-hit games in all of them
- Last night the Red Sox scored 2 runs, which is the 36th time this season the team has scored 2 runs or less in a game