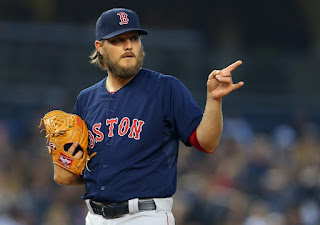 The Red Sox officially get to the half way point of their season tonight and will attempt to win back to back series against divisional opponents. The Sox will send Wade Miley (7-7 4.38) to the hill before they head back to Boston for a holiday series against the Astros. The Jays will have rookie Matt Boyd (0-1 5.40) who is making just his 2nd career start, but that has always seemed to spell trouble for the Sox. They are only hitting .226 against left-handers this year and on the other side, the Jays offense finally exploded yesterday which might make things pretty ugly tonight.

In Boyd's first career start he gave up 4 runs, 3 of them via solo homers, so the Sox offense might look to the long ball in order to get out early on the Jays. Now that Hanley Ramirez is back after missing 6 games due to his hand injury, the lineup appears much more capable of a big inning.

- Mookie Betts currently has a 13 game hitting streak against the Blue Jays
- Wade Miley is 11-4 career in the month of July
- The loss yesterday halted a 3 game winning streak for the Sox, they have yet to win 4 in a row this season
- Ryan Hanigan was activated from the DL today and will be in today's lineup after missing an extended amount of time due to a hand injury; Jonathan Aro was optioned down to Pawtucket


Have a question for Mike during the game or whenever a baseball discussion is going on, reach out via Twitter: @86flynn