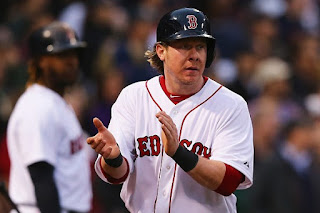 With 5 games remaining before the All Star Break, the Red Sox are looking at another legitimate opportunity to gain ground in the AL East. They start a short two game series tonight against the Miami Marlins and then end the first half of the season with the Yankees over this upcoming weekend. The Sox will have Wade Miley (8-7 4.53) taking the mound for the final time before the break, and will be opposing Dan Haren (6-5 3.45), with the first pitch scheduled for 7:10 pm.

The Red Sox did make another move to the 25 man roster; they sent Steven Wright back down to Pawtucket and re-called Travis Shaw, who will be starting at first base. That means once again Mike Napoli will be out of the lineup, who was out of the lineup on Sunday and was replaced by David Ortiz, which was the first start at 1st for Ortiz in a non-interleague game in a decade. Also, Ryan Hanigan will be getting his 4th start behind the plate since returning from the DL.

- Wade Miley is 2-2 in 4 career starts against the Marlins, and also owns a very impressive 0.93 ERA
- David Ortiz has three homers off of Dan Haren in his career
- Dee Gordon, who was voted in as a starter for the NL All Star team has been in a horrible slump since teammate Giancarlo Stanton was hurt, he's hit just .182 in his last 8 games.