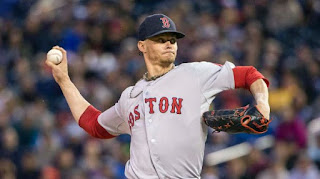 To all the Sox fans that might have started to ignore what's been happening with the hometown team over the past couple of weeks, the greatest rivalry in sports starts up once again tonight at Fenway Park and it comes at the absolute perfect time. The series right before the All Star break, when the race for the playoffs begins to heat up and we get closer to the trade deadline is the best way to find out if the Sox are truly back in it. Tonight, you get the two "aces" of each staff on the mound; Clay Buchholz (7-6 3.27) vs Michael Pineda (8-5 3.79) with the first pitch scheduled for 7:10 pm.

Mike Napoli gets back into the starting lineup for the first time in almost a week as he attempts to hit his way out of his horrible first half slump. David Ortiz and Hanley Ramirez head back to their expected positions after Ortiz made it be known how little he cared for being out on the field on a nightly basis. Dustin Pedroia is eligible to come off the DL today, but it appears he will be sitting out this series just as a precaution with the hopes that he is fully recovered from his hamstring injury and will bolster this lineup even more when the second half begins.

- Clay Buchholz is 5-0 with a 1.99 ERA in his last 7 starts
- The Yankees have won their last 4 games against the Red Sox
- Xander Bogaerts has a 7 game hitting streak, hitting .433 with 8 RBIs
- David Ortiz is hitting just .128 against lefties this season

Have a question for Mike during the game or you see him sitting behind home plate at tonight's game, reach out via Twitter: @86flynn