Is Mike Napoli on his way out? 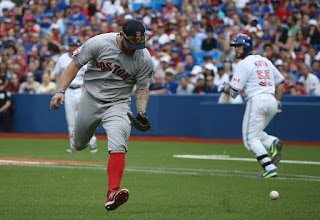 Well Mike Napoli, it has been fun. You were a major contributor to the 2013 World Series team. You hit some big home runs, you made some key defensive plays, you always seemed to work the count and grind out a tough at bat, you had the best beard, and you were a fan favorite.

Flash forward to 2015, you are not the same guy. You can't hit your weight, you strikeout all the time, you never drive in runners, your beard isn't as long, and you are not the Gold Glove caliber first baseman you once were. Nap, as much as we love you, our time together is up. We had a great run. There are some memories we will never forget. You were a big part of all of our lives, but it is time to move on.

I just broke up with Napoli. Sure, it was tough, but the time was right. He is in the last year of his deal and does not project to be with this team going forward. Secondly, Napoli is obviously not helping this current team and if they still want to make a run this year, Mike Napoli only hurts their cause. The Red Sox front office members will be the next ones to break up with him. Mike Napoli is definitely on his way out.

Going forward, who is the starting first baseman for the rest of this year? I will have to assume that Ortiz is not going to be at first base everyday. That being said, they still have a few options:Brock Holt could slide over and play there everyday once Dustin Pedroia is back and healthy, or they could call up Allen Craig and see if he has any place on this team going forward, or they could slide Pablo Sandoval over to first.

The last option, Sandoval at first, makes the most sense to me. In a Twitter conversation I had with Mike Mutnansky of WEEI, he said Sandoval had been taking grounders at first prior to Friday night's game.

@Ian_Vescera Pablo was taking grounders at 1st before the game, which I thought was interesting...

This would lead to an opening at third base. Odds are, Brock Holt would go to third and play there everyday. The only other potential option they have would be to slide Hanley Ramirez back over to third. However, this creates two people out of position and I am not sure the Sox want to see Hanley at third.

Although getting rid of Mike Napoli creates a ripple effect, the Sox need to make a move. Napoli is not helping this team and is definitely not going to be with them next year. The Sox front office needs to pull the plug if they still want to make a run this year. Nap, thanks for everything and best of luck to you.

Thoughts on Mike Napoli?
Comment below or reach out to me on twitter @Ian_Vescera
Click here to read more posts by Ian Vescera.
Stats from baseballreference.com
Photo from espn.com