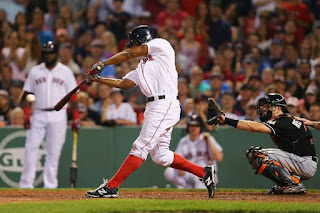 All right Red Sox Nation, Xander Bogaerts needs our help. About a month ago, I wrote a piece saying that Bogaerts was ticketed for Cincinnati this July. Clearly, Ned Yost didn't read my piece. However, Xander Bogaerts is in the final vote and still has a chance to make the team.

Now, I could bore you with stats saying Bogaerts belongs, he got robbed, and yada yada yada. I won't do that. We all know this kid belongs in the Midsummer Classic. Case in point, he hit a CLUTCH bases clearing, 3 run single with two out tonight. It won them the game. Big time players make big plays. Bogaerts did just that. We know he is easily one of the top 3 at his position in the AL, if not the best. So instead, I will just ask you to vote for Xander Bogaerts and get him to Cincinnati where he belongs.

Now there are 3 ways to get Bogaerts to the All-Star Game:

1) Text A1 to 86269- Voting via text is unlimited, message and data rates apply
2) Vote for Bogaerts online at mlb.com: Click here to vote, voting also unlimited here
3) Use #XForASG in a tweet on Friday 7/10 between 10am and 4pm ET- Voting is limited to 1 vote per tweet (using the #XforASG 5 times in one tweet only counts as one vote). Keep tweeting with #XForASG though, it promotes awareness

It is up to us Sox fans. If Royals fans can stuff the ballot box, so can we. Show why we have the best fans in the game. I'm even willing to get a mohawk if we get Xander to the All-Star Game.


If this gets 150 rt and Bogaerts makes it, I'll get a mohawk. I've never had anything but a buzzcut before #XforASG https://t.co/WewB8nhDrP

If i am willing to do that, surely you can vote for Bogaerts non-stop. Bogaerts deserves to make this team. It's the least we can do to thank him for becoming a star and the future of our team. Let's get it done!

Thoughts on the future All-Star?
Comment below or reach out to me on twitter @Ian_Vescera
Click here to read more posts by Ian Vescera.
Photo via espn.com