Last chance to vote Xander Bogaerts to the All-Star Game 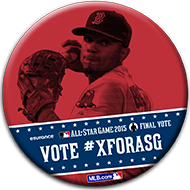 It is hard to believe that we are creeping up on the midway point of the season with the 2015 All-Star Game hitting us next week. With that comes every sports fan's frantic efforts to send their favorite players, who may have been snubbed on the initial ballot, to the game. All of Red Sox Nation has taken to social media over the past week in droves, to send the X-Man himself, Xander Bogaerts, to the All-Star Game. This is your final reminder that today is your last chance to make that happen, Red Sox Lifers.

Despite some of the team's woes at the start of the season, 2015 has been a very good year for the X-Man. Currently, Bogaerts ranks first among American League Shortstops in hits (92), doubles (19), RBI (41), times on base (109), and wins above replacement (2.6). However, as of this morning, Bogaerts is still trailing the other American League Final Vote candidates.

If you haven't done so already, we need to rally together, Red Sox Nation and get this done by doing any (or all) of the following:

The 2015 All-Star Game in Cincinnati will be televised on FOX Sports, with coverage beginning at 7 p.m. Eastern, this Tuesday, July 14.  Let's get this done, Red Sox Nation!