Three unearned runs in the top of the third inning contributed to a 5-1 Red Sox loss to the Yankees in the first game of their three-game weekend series at Fenway Park. 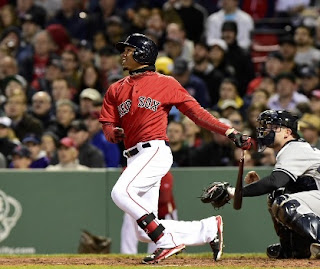 The loss snapped a four-game winning streak for Boston.

Worse than the loss, perhaps, was the sight of starting pitcher Clay Buchholz leaving the game in the third with what was termed right elbow tightness.

The Yankees got on the board in the top of the first inning on a solo home run by Alex Rodriguez. The three runs in the third were aided by errors by Brock Holt and Mike Napoli.

The Red Sox scored in the bottom of the fifth inning on a solo home run by Mookie Betts (pictured), his tenth long ball of the year. New York added a run in the eighth on an RBI single by Jacoby Ellsbury.