Four unearned runs in the bottom of the third inning and six innings from Rick Porcello helped the Red Sox beat the Miami Marlins 6-3 at Fenway Park. The win was the fourth in a row for Boston, their longest streak of the year. 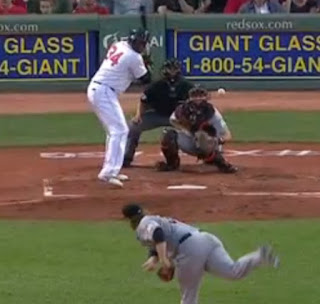 In the third, Brock Holt drove in a run with a ground out, Xander Bogaerts had an RBI single, and David Ortiz (pictured) launched his fifteenth home run of the season to give the Red Sox a 4-0 lead.

Miami cut the lead in half in the top of the fourth inning on five straight hits off Porcello. He settled down after that to finish the inning and pitched a 1-2-3 sixth.

The Red Sox added a run in the bottom of the sixth when Ortiz scored on a double play ground out by Pablo Sandoval.

They scored again in the seventh when Alejandro De Aza came home on a throwing error.

Miami tacked on a run in the eighth on a Michael Morse home run off reliever Matt Barnes.

Porcello won for the first time since May 16. He went six innings, allowing two runs on eight hits (none of which left Fenway) and a walk while striking out four. Koji Uehara pitched a clean ninth inning for his 21st save of the year.

The home run was the 481st career blast for Ortiz who is now just nineteen away from 500. He also played first base again tonight for the slumping Mike Napoli.