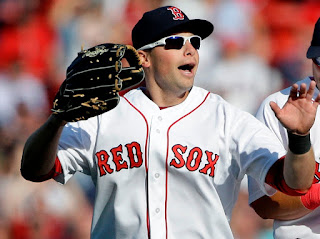 Daniel Nava was a part of the Boston Red Sox for the better part of eight years.

What most will never forget were his contributions off the bench to the 2013 World Series Championship Boston Red Sox.

Some might even remember his first Major League at bat, as improbably and special as he was, a grand slam home run at Fenway Park.

It all started rather strangely, with him being cut by his college team, became their equipment manager, joined a smaller college for financial reasons and was able to earn a baseball scholarship with the team that cut him. He never got drafted, joined an independent league and was finally noticed by the Boston organization who got him to sign a $1 dollar contract.

You are reading that right, $1.

Nava played well enough in all levels not to get cut and finally got to hit that amazing grand slam home run as his first at-bat in 2010. Again he struggled later in that same year and was designated for assignment. He never gave up, coming back to the Major League roster in 2012, helping to win a World Series ring in 2013 and playing most of the 2014 season in the Red Sox outfield.

He was always like a little kid, it felt like you were watching a Little League player discovering the joys of baseball. We will never forget the smile that was always captured when he was on camera.

This year Nava fell of the tempo of the previous three years where he held the 10th best OBP of all MLB outfielders and with the over full outfield Boston has, was put on waivers.

After being claimed by the Rays, Nava remained classy and put out the following thanks to the Red Sox fans.


Red Sox fans everywhere will always remember the enthusiasm, the smile, the 2013 season and wish Nava well in his future.