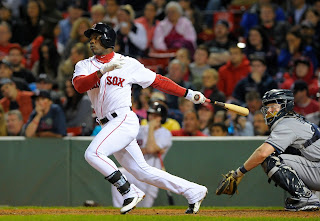 The Red Sox got their first road win in a month last night and will look to win the series against the Yankees tonight. They're still at the bottom of the American League, but last nights game had everything you would have wanted from the team if they were still competing for a playoff spot. Eduardo Rodriguez (6-3 4.34) will get the start for the Red Sox and will be up against the Yankees for the second time this year. The Yankees will have CC Sabathia (4-8 5.54) on the mound, as he tries to continue to get his season on track. He hasn't been apart of the decision in each of his last three starts and currently owns the worst ERA of his career.

Currently the Yankees have a 4.5 game lead on the red hot Toronto Blue Jays and with a win tonight the team would get to 14 games above .500 at home. The Red Sox will play the Yankees twice more this season coming at the end of this month and the 2nd to last series of the season, which would have made for a great finish.

- Alex Rodriguez is hitting .207 in 7 homes games since the All Star break
- CC Sabathia is 11-12 in his career against the Red Sox with a 4.63 ERA
- Pablo Sandoval is has a 13 game hit streak against the Yankees
- Rusney Castillo will be hitting first in the lineup, he's never hit higher than 5th before tonight