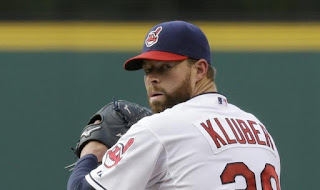 The rubber match between the Indians and Red Sox will be tonight starting at 7:10 pm and the Indians will have their reigning Cy Young award winner on the mound. Corey Kluber (8-12 3.34) isn't having the same magical season he had in 2014, but neither have the Indians as the team has taken a few steps back since being in the playoff hunt last year. But for the Red Sox, with another last place finish expected, the Sox will look to win their second series in a row with Joe Kelly (5-6 5.69) on the mound, who has won his last three starts.

Kelly has benefited from a ton of run support during his win streak, actually 27 runs to be exact. But his biggest issue this season has been going deep into his starts. He's currently gone 11 straight starts of not going beyond the 6th inning, which is far from what the organization had hoped for when they traded for him last summer.