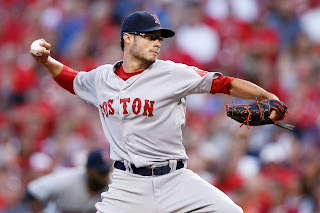 The Red Sox bullpen once again was exposed yesterday, and Junichi Tazawa was the main culprit this time around. On the verge of winning their third straight series and more importantly taking 3 of 4 from the AL leading Royals, the Sox couldn't hold down a 2 run lead in the 9th. It's a problem that has persisted over the 2nd half of the season and without Koji time in the 9th, it appears that the team doesn't even have a capable replacement for the remainder of the season.

Tonight the Red Sox and Joe Kelly (6-6 5.37) will take on a recently hot White Sox offense that tore apart the Mariners over the weekend, similarly to how Boston attacked them earlier in the week. However, with Jeff Samardzija (8-9 4.69) on the mound, we might see the White Sox offense take the night off. In his last 4 starts, twice the offense didn't score and once they scored only 2 runs, which has helped contribute to his current 4 game losing streak. On the other side of the diamond, the Red Sox have one of the worst offenses in baseball when playing on the road, barely averaging over 3.7 runs per game all season.

- Overall Hanley Ramirez is 10/23 against Jeff Samardzija
- Joe Kelly is going for his 5th consecutive win tonight, which would be a career best
- Melky Cabrera is 6 for his last 40 and has one extra base hit in his last 10 games
- As mentioned before, Samardzija hasn't had a ton of run support during his 4 game losing streak, but he also has a 9.27 ERA during the streak too