Junichi Tazawa gave up two runs in the 8th inning as the Rays rallied from a 3-2 deficit to defeat the Red Sox 4-3 on Sunday afternoon at Fenway Park.

Wade Miley started for Boston and gave the Sox 6.2 solid innings, giving up two runs on five hits and just one walk while striking out four.

The Rays took an early 1-0 lead in the top of the first on a leadoff home run by Brandon Guyer. The Red Sox answered back with an RBI double by Hanley Ramirez and a run-scoring single by Mike Napoli. 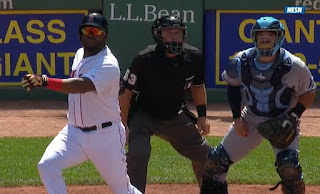 Ramirez left the game in the eighth inning after singling with what appeared to be an issue with one of his knees. Prior to the game, the Red Sox placed pitcher Rick Porcello on the 15-day DL with a right triceps strain. Recently acquired Ryan Cook was added to the roster.

Manager John Farrell said after the game that rookie Henry Owens will make his debut on Tuesday against the Yankees in the Bronx.