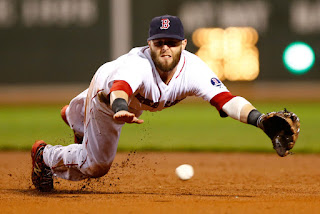 The Blue Jays are clinging to a half game lead for first place over the Yankees with under a month to play and the Red Sox are playing the role of spoiler pretty well so far. Although they lost two of three to the Yankees last week, they will have plenty of opportunities against their AL East foes over the next 24 games to impact the playoff race. The Jays will have R.A. Dickey (10-10 4.09) on the hill tonight and he hasn't lost a start in two months. Since the All Star break, Dickey has had 10 starts and has a record of 7-0 with a 2.78 ERA, leading the surge the Jays have needed to be serious playoff contenders.

The Red Sox will counter with rookie Henry Owens (2-2 5.87) and concerns over the long ball should be at the top of the list for fill-in manager Torey Lovullo. Owens has given up 6 homers at Fenway in just 3 starts and the Jays have a bunch of sluggers that love to hit against lefties. The Sox offense has come alive during their 4 game win streak and David Ortiz is now just 3 homers away from 500. He will get some more support in the lineup starting tonight with the addition of Dustin Pedroia, who comes off the DL after re-injuring himself in mid July.

- Besides activating Dustin Pedroia from the DL, the Sox also recalled pitchers Jonathan Aro and Matt Barnes, while also purchasing Rich Hill's contract
- David Ortiz has 3 homers against R.A. Dickey in 28 at-bats, hitting .321 and this season Pablo Sandoval is 4/12 with a homer and 2 doubles
- Mookie Betts has a 13 game hitting streak, and is hitting .396 during that streak
- Josh Donaldson is hitting .347 against lefties this season