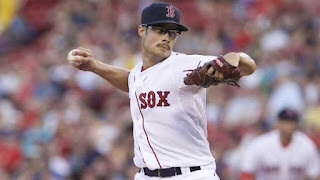 The Red Sox will attempt for a 4th time this season at beating the Blue Jays starting pitcher tonight. Drew Hutchison (13-3 5.07) is going for his 4th win against the Red Sox this season, even though his ERA against the Sox this year is 11.91. He's managed to win 13 times this season while sporting an ERA over 5 but most of this is attributed to him getting the most run support of any pitcher in baseball. The Red Sox will turn to their hottest starter over the past month and a half with hopes of stifling the Jays bats.

Joe Kelly (9-6 4.84) has won his previous 7 starts and is making a strong case to be kept in the rotation for next season as he's commanded all of his pitches during his current win streak. Kelly hasn't allowed more than two runs in his last 6 starts and during his current winning streak, has an ERA of 2.72. Kelly has also faced the Jays 3 times this season and hasn't had the same type of success he's recently been having. He's walked 12 in those 3 starts and his ERA is well over 7. So between the two starters tonight, we might finally see something break down for one of them.

Tonight wraps up the Red Sox home stand, so far they've gone 5-3 and will head down to Tampa for a weekend series against the Rays.

Here is the lineup for the Red Sox tonight:

- Josh Donaldson is hitting .421 in his last 10 games, with 8 extra base hits
- Mookie Betts and Pablo Sandoval both are 5/7 against Hutchison this season, each with a homer and two doubles
- The Blue Jays are 29-8 since July 29th
- Dustin Pedroia returned last night to start his first game since July 22, he went 1/4 with a double