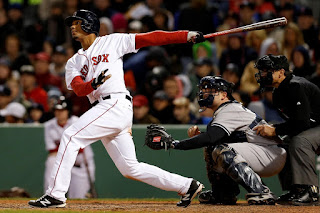 Xander Bogaerts is going to be a great player. That's what we've heard from scouts, managers, players and analysts since the day the team signed him. He became spark plug for the team in the World Series in 2013 and then took a couple of steps back in his development last year both in the field and at the plate. But Bogaerts has bounced back nicely this year and the crazy thing is that he's only 22! Here are some of his impressive numbers for this season: his batting average is .323, OBP: .353 and slugging is .426. The complete list of players to do that in the AL in the last 75 years: Ted Williams, Al Kaline, Paul Molitor, Ken Griffey Jr., Alex Rodriguez and Mike Trout.

Another young up-and-coming star that the Sox have developed will be on the mound tonight. Henry Owens (3-2 4.33) will attempt to gain some more ground against the Rays and get closer to the .500 mark as the season comes to an end. For the Rays, Matt Moore (1-4 7.06) is still trying to get back to the basics after undergoing elbow surgery last year. He did not allow a walk in his last start, which was the first time that's happened this season and his velocity is starting to improve as well. However, his last start against Boston, he became apart of baseball history as he gave up David Ortiz's 499th and 500th home runs.

- David Ortiz is 8/18 in his career against Moore, with 3 homers and 2 doubles
- Xander Bogaerts currently has a 10 game hitting streak and is hitting .391 during that streak and is only 14 points behind Miguel Cabrera for the AL lead
- Owens has 4 starts at Fenway this season and it hasn't been great, posting a 6.86 ERA