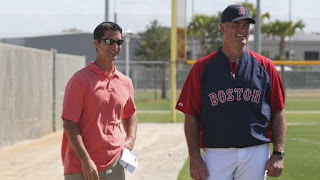 The final 10 games of the season are upon us and if you're still interested in watching the Sox finish up their season, there's plenty of things to watch for. Wade Miley (11-10 4.34) gets the start for the Sox and has had a lot of success against the Rays over his career, going 3-1 with a 1.85 ERA in 6 appearances. He'll attempt to give the Sox a season series victory, because right now both teams each have 9 wins apiece. The Rays will have Erasmo Ramirez (10-6 3.70) who has bounced back nicely since coming over to the team back in Spring Training.

But what to watch for as the Red Sox close out the 2015 season is how the young players continue to perform and showcase themselves for a spot on next years team. The big news coming in right now is that the new Vice President/General Manager of the Sox will be a familiar face who's seen a lot of the young talent come up through the organization. Mike Hazen will be the next GM and will work closely with Dave Dombrowski to identify who's worth keeping around to build the future of this team or who can help via a trade to bring in the talent that's needed from the outside.

- Xander Bogaerts currently has a 12 game hitting streak, a personal best
- David Ortiz is hitless in his last 4 games
- Pablo Sandoval is missing his 4th straight game with an upper respiratory infection.