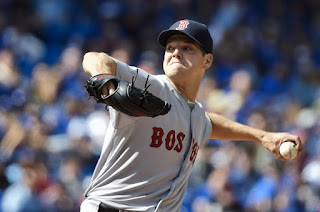 The Sox begin their final home series of the season tonight against the Orioles, a team still clinging to hope that they can find a way into the final Wild Card spot. The O's are just 3 1/2 games behind the Astros for the final spot, but have both the Angels and Twins in front of them. The Sox have been playing from the back of the pack for a majority of the season and most of these games they've been playing this month haven't had much of an impact on the playoff race. These last few games at Fenway will have a bit of the playoff pressures for both teams, so another great reason to watch how some of the young talent plays for Boston.

The Red Sox will start Rich Hill (1-0 1.93) for the third time this season and first time he's gotten a start at Fenway since May of 2013 when he was with the Indians. Hill has made an impressive comeback, as he was playing in the independent league just a few months ago. The O's will counter with Kevin Gausman (3-6 4.26) who hasn't had any success on the road this season, going 0-5 with a 6.20 ERA in 8 starts. One player that has had success against Gausman is David Ortiz, who's 4/10 with 2 homers against the right-hander.

- The Sox announced yesterday that both Hanley Ramirez and Pablo Sandoval are both being shut down for the remainder of the season
- The team announced today that Frank Wren has been named VP of baseball operations, to assist Dave Dombrowski
- With Ortiz hitting his 502nd homer last night, he's now just two away from Eddie Murray for 26th place on the all time home run list