11 years ago tonight, the GREATEST COMEBACK EVER was complete 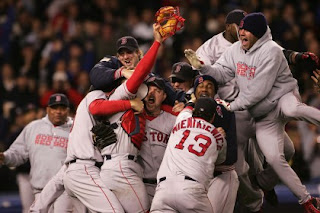 On this miraculous date 11 years ago, the Boston Red Sox did the unthinkable. They won game 7 of the 2004 ALCS by a score of 10-3 in Yankee Stadium. In the process, they overcame a 3-0 series deficit to the New York Yankees and became the first and only team in MLB history to win a postseason series when trailing 3 games to none. Simply incredible. Only a group of "idiots" could pull this off!

It is truly remarkable to think about what this team did. In the history of baseball, we will never see anything like it again. The 2004 Boston Red Sox were a once in a lifetime type of team. Whether it was their ability on the field or their personalities off of it, this team was really something special. No deficit was too big. This team just did not quit.

As noted in the broadcast, Joe Buck says "For people in New England, they will always remember where they were when the Red Sox finished off 4 in a row, against the Yankees, at Yankee Stadium, on Wednesday October 20th, 2004." Earlier today on Twitter and Facebook, we asked Sox fans that same question. Here are some of the awesome responses.


Happy October 11, #RedSoxNation! Where were you 11 years ago tonight? pic.twitter.com/YaiJYiVNJN

@RedSoxLife station in Korea, was watching the entire series live on @armedforcesnet

@RedSoxLife @JuliaCSocial @oldmankenna Watching w/ my big sister in our Revere, MA apartment in the same clothes since Game 4 -- woo!!

@RedSoxLife At the very top of Yankee Stadium next to right field FAIR pole. Watching Damon doink one off the pole. Laughing and loving it!

@RedSoxLife I, being 7 at the time, was sent to bed by my mom. My dad snuck upstairs and carried me down so I could watch the end!

Max and I share the same story here. I was also 7 years old at the time and my dad also brought me downstairs to watch the final few innings. After the last out, I ran around my house, took my shirt off, waved it like a rally towel, and screamed my head off. It was safe to say that I beyond excited. I am sure my mom and sister (who were sleeping at the time) really appreciated that. Even though I was just 7 years old, I remember it like it was yesterday. It is easily my top moment as a baseball fan.

Thoughts on the greatest comeback in the history of baseball?
Comment below or reach out to me on twitter @Ian_Vescera
Click here to read more posts by Ian Vescera.
Photo via boston.cbslocal.com
Video via mlb.com