Tom Brady just completed a masterful game winning drive to beat the Saints with 5 seconds left in regulation. Patriot fans rushed home to catch Game 2 of the ALCS. Max Scherzer was dealing and looked like he was about to spoil the perfect day in Boston. He silenced the Red Sox bats all throughout the night. The Sox were down 5-1 in the bottom of the eighth inning. The bats heated up and with two outs in the eighth and the Red Sox found the bases loaded. In comes Joaquin Benoit to pitch, Ortiz steps up to bat. Red Sox fans were all thinking the same thing, but many probably thought it wouldn't happen. Ortiz had never homered against Benoit in his career, until now. Benoit delivered a 86 MPH fastball on the first pitch, and Ortiz took into over the right field wall into the bullpen. Just like that, we had a tie game.

Saltalamacchia later delivered the game winning RBI in the bottom of the ninth. The Red Sox were able to avoid going down 0-2 in the series as it was heading back to Detroit. 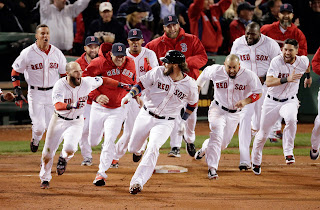 This play happened exactly two years ago today. Ask any Red Sox fan where they were or what they were doing when that happened, and they will tell you. It sparked the Red Sox throughout the rest of the ALCS and World Series and made the bullpen cop pose a staple all Sox fans knew. Hopefully we can see Ortiz hitting clutch home runs in the playoffs a few more times in his career.


Thoughts or comments? Let me know below or find me on twitter @JonLestersGhost