For the love of Bartman (and Buckner) root against the Cubs 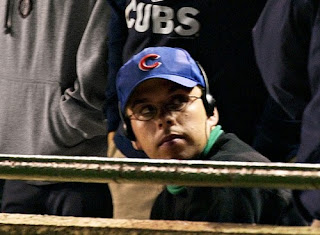 
I was thinking about cheering for the Cubs this postseason for one reason: Marty McFly.


In the movie “Back to the Future Part II,” which came out in 1989, McFly showed us, thanks to Doc’s time machine, that the Cubs finally win the World Series in 2015.


How cool would it be if the movie got that right? Sure, the flick was way off on the flying cars, but it nailed the hover boards, drones and a baseball team in Miami.


Any thoughts I had of cheering for the Cubs, though, ended when I watched a different movie for a second time.


Not only do I hope the Cubs lose, I hope they lose in monumental heartbreaking fashion. I hope it hurts for a long, long time.


For what Cubs fans did to Steve Bartman, they deserve the pain.


“Catching Hell,” an ESPN film, documents the disgraceful way Bartman was treated by his fellow Cubs fans. His life was threatened, and had nearly every Cubs fan inside – and many outside – the “Friendly Confines” of Wrigley Field chanting swear words at him.


“Put a 12 gauge in his mouth … and pull the trigger,” one fan yelled at Barman as security was taking him out of his seat for his protection.


“We’re going to kill you,” many others yelled.


Thousands of others yelled insults and hurled objects at Bartman. Even then-Illinois governor Rod Blagojevich, who is now serving a 14-year prison sentence for taking bribes in exchange for political appointments, got in on the heckling of Bartman, whose crime was no crime at all.


In 2003, Bartman was a young man excited to have a ticket to Game 6 of the National League Championship Series when the Cubs were trying to close out the Florida Marlins and punch their World Series ticket.


With one out in the eighth inning, Bartman did what most of us would do. He tried to catch a foul ball that was coming right to him. Unfortunately for Bartman, and the Cubs, left fielder Moises Alou had a beat on the ball and had a chance at making a spectacular catch.


Alou couldn’t catch the ball, however, because it hit Bartman first.


Instead of pointing out that their shortstop booted a tailor-made double play ball, the fans tried to ruin the life of a dorky-looking fan who was one of them for seven and a third inning
Of course, it turns out Bartman was way better than them. The former Little League coach is apparently a man of great integrity who turned down hundreds of thousands of dollars – at least – that he could have received for making public appearances.


Bartman just wanted to be left alone, even though Cubs fans and media were hell bent against that, showing that the ugly incident wasn’t a spur-of-the-moment thing. It was a decade long black eye on Chicago, the Cubs, the national pastime and the American way. It was one giant leap backward for mankind.


Every single Cub fan I ever encountered blamed Bartman for the loss of Game 6 and, somehow, Game 7.


But, Bill, you say. You’re a Red Sox fan. Ever hear of Bill Buckner? Isn’t this the height of hypocrisy?


I’m glad you asked because the Buckner situation is totally different than the Bartman nightmare.


For one thing, the Buckner hatred/mocking was completely media driven. It was not the initial response of Red Sox fans.


As documented in a Sports Illustrated piece by Peter Gammons, “Hub Hails Its Hobbling Hero,” Red Sox fans, for the most part, embraced Buckner after his error in Game 6 of the 1986 World Series.


Sox fans gave Buckner a long standing ovation during the 1987 home opener. They cheered him again in 1990 when, then 40, Buckner made a 22-game comeback attempt with the Red Sox.


The more the highlight of the Buckner error was replayed out of context, the more he became the butt of jokes and the object of rage.


If you took a poll, I would wager that 90 percent of the fans who blamed Buckner thought that the team would have won the World Series had Buckner not let the ball roll between his legs.


In fact, if Buckner would have stabled the ball cleanly and he or pitcher Bob Stanley beat the speedy Mookie Wilson to first base – something that certainly was not a given – the game would have gone to the 11th inning. Other Red Sox already blew the World Series win before that slow roller.


The treatment of Buckner is definitely a black eye for Red Sox fans, even though true Red Sox fans always knew the team would have never been in position to fail on the big stage if it wasn’t for the ultimate gamer playing first base that season.


The most disgusting part of that black eye came on the night when the Red Sox finally won the World Series in St. Louis in 2004. A couple of bandwagon fans marched around with a banner that read “We Forgive Buckner.”


It wasn’t anybody’s place to forgive. Fans should have been begging for forgiveness from the man who felt he had to move his family out of New England a decade earlier. They should have been thanking him for his heroic effort that nearly delivered a title.


Buckner, though, said he never felt he had to forgive any Red Sox fans.


“In my heart I had to forgive the media for what they put me and my family through,” Buckner said after returning to Boston to throw out the first pitch in the 2008 home opener.


One other big difference between Buckner and Bartman was that Buckner signed up for the hero-and-goat game when he became a major league player.


While it seems like pennies compared to modern-day players, Buckner made $785,000 to play baseball in 1986.


That certainly isn’t worth what he endured, but it makes it different. All Bartman did was pay to get into a game and, in a split-second decision, try to catch a foul ball.


“To get crucified the way he did is mind boggling. He didn’t do anything,” Bucker said in defense of Bartman in “Catching Hell.” “You could take a major league player and sit him in that seat and he’d have done the same thing that Bartman did. I mean, I would have done it.”


I’m not sure if Bartman will ever be able to find it in his heart to forgive Cubs fans and the media for torturing him like ten Bill Buckners. Maybe he has. Maybe he will someday.


Until the day he publically forgives the fan base that still blames an actual goat for its 107-year championship drought, I will be rooting against the Cubs.


I hope they go another 107 years before they finally win a World Series title. That way every fan who hated on Bartman will be long gone and not able to celebrate it.


That way I also won’t feel like a complete idiot if the Cubs win the 2015 World Series.


For crying out loud, a guy with a time machine told us that the Cubs would win this year, and I didn’t put any money them.


Hopefully Steve Bartman was smarter than that.